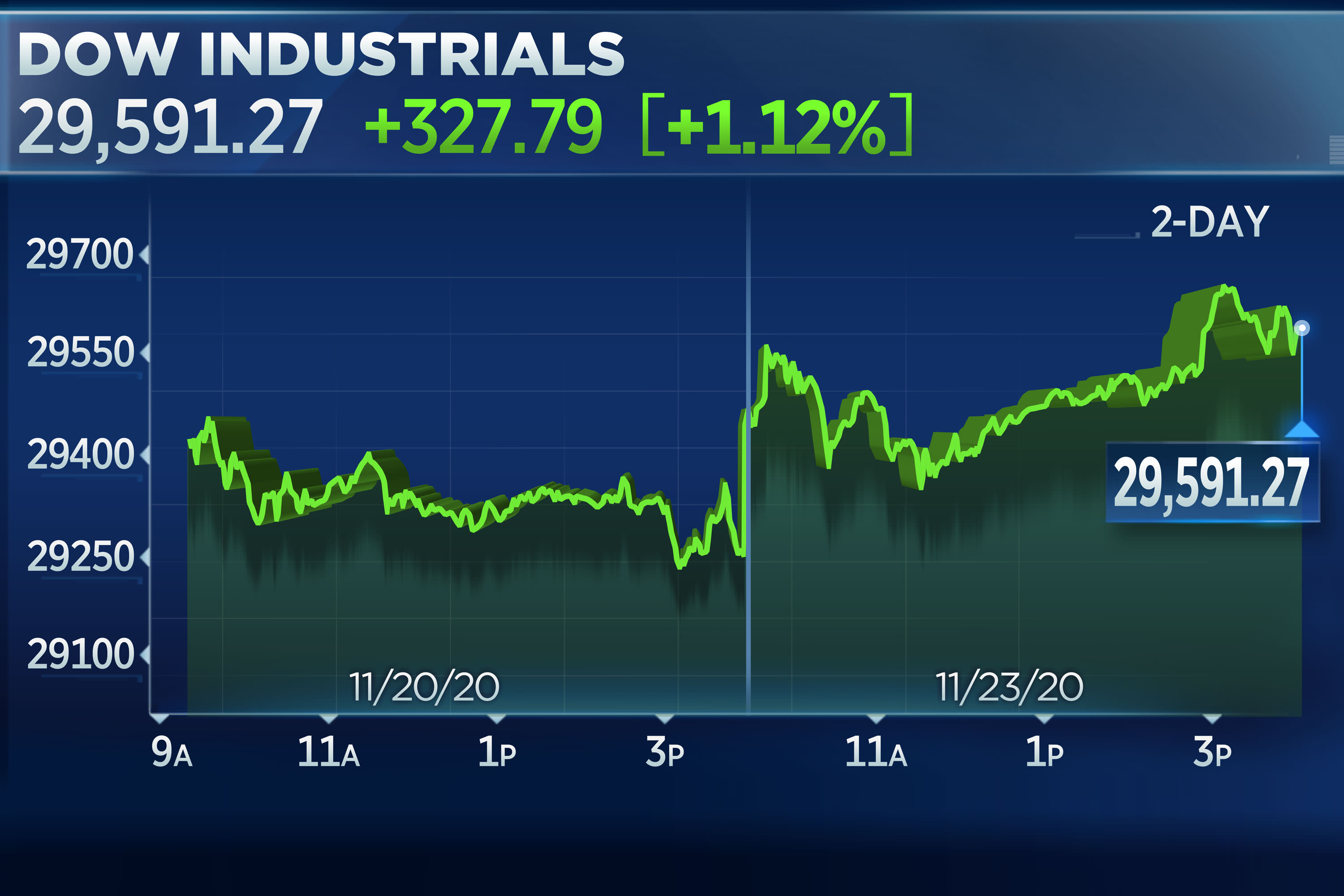 Stocks rose on Monday after AstraZeneca and the University of Oxford said their coronavirus vaccine was up to 90% effective, becoming the third inoculation this month that was revealed to be effective in trial data.

AstraZeneca said interim analysis showed its vaccine has an average efficacy of 70% with one dosing regimen showing effectiveness of 90%, while the other demonstrating 62% efficacy. This follows late-stage trial data from Pfizer-BioNTech and Moderna showing that their respective Covid-19 vaccines were around 95% effective.

Shares of cruise lines and airlines jumped on hope distributing these vaccines would reopen the economy and boost travel early next year. Shares of Carnival Corp. added 3.5%, while United Airlines rose 2.5%.

Tech stocks, meanwhile, were under pressure. Facebook and Apple fell 1.7% and 2.6%, respectively. Netflix traded lower by 1%. Microsoft and Alphabet dipped.

The positive vaccine data this month has jolted stocks higher to record highs, despite concern about rising cases. Still, the Dow is up 10% in November. The S&P 500 is up 8%.

“With three vaccines now showing efficacy at 90%+ and health officials in the U.S. and EU rushing to approve them, the vaccination process is set to commence before the end of the year,” wrote Adam Crisafulli of Vital Knowledge. “This vaccine optimism is more than offsetting the very grim near-term transmission/mitigation landscape as cases spike and governments take further action to curb the virus spread.”

The Dow and S&P 500 were coming off a losing week as Covid-19 cases continue to rise, with the U.S. reporting a record-high spike of more than 195,500 new cases on Friday. Public health officials have warned that Thanksgiving celebrations on Thursday could further exacerbate the outbreak.

The spike has led to coronavirus-related restrictions in some places. On Thursday, California Gov. Gavin Newsom instituted a “limited Stay at Home Order” on a majority of the state’s residents, requiring nonessential work and gatherings to cease between 10 p.m. and 5 a.m. The move followed New York City Mayor Bill de Blasio’s decision to close the nation’s largest school system amid a jump in cases.

“Stocks this week will trade on lockdown concerns and rising cases, but could see a boost into early December as the optimism around a near term, stopgap stimulus package grows,” said Shannon Saccocia, chief investment officer at Boston Private.

“Overall, the push and pull between tech stocks and cyclicals will likely continue through the next couple of weeks, and we could see some tough days as economic data is released that reflects the deterioration in consumer spending we are currently experiencing,” Saccocia added.

Such measures will “likely deliver negative growth” in the first quarter, JPMorgan economists said Friday. The firm downgraded its first-quarter GDP outlook to a 1% contraction, the first on Wall Street to forecast negative GDP for the first quarter of 2021.

On Monday, Goldman Sachs cut its fourth-quarter GDP forecast along with its economic growth estimate for the first quarter of 2021. The bank now expects the U.S. economy to grow by 3.5% in the fourth quarter. That’s down from a previous forecast of 4.5% annualized growth. In the first quarter of next year, Goldman now sees economic growth of just 1%, down from a previous estimate of 3.5%.

Subscribe to CNBC PRO for exclusive insights and analysis, and live business day programming from around the world.

Oil prices extend rally after surprise fall in US stocks

Five aspects to consider before buying a ULIP